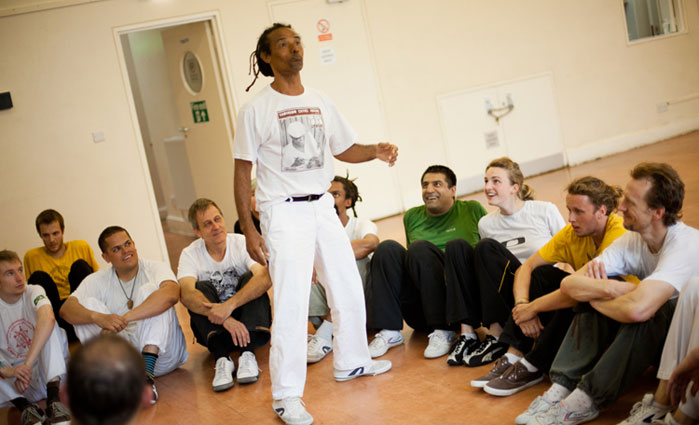 It is only through the support and encouragement of our partner organisations that ELC and Project gem are able to offer capoeira to so many people to enjoy. We would like to thank all of our friends and partners listed below.

“A quick, black fox, who moves amusedly, creating physical jokes”
Marrom dedicates his life to practising and teaching Capoeira Angola.  He recalls that it was words from Mestre No in Bahia that sparked his decision to pursue a path of Capoeira Angola.
Since the nineties Marrom and his students formed an important part of the growing community of Capoeira Angola and non-conformist Capoeira growing in Rio at the time. The rodas of Russo, Camaleao, Formiga, Angolinha and Marrom’s Friday Roda became focal points for this developing community. The Old Guard Mestres such as Gato Preto, Boca Rica, Brandao, Felipe from Santo Amaro, the late Bigodinho, and Joao Grande are also all visitors to his academy. Marrom’s curiosity for and continuous research and study of what it is to embody Capoeira Angola is passed on in his teaching.
As a Mestre, Marrom is informed by non-Cartesian African perspectives. Once I asked him to teach me a fish-dish that he cooked really well.  “I could give you the recipe and tell you what to do…but that’s not how we used to learn in Africa, no one would ask for the recipe, but would help cook. After helping to cook you’d find that you knew the recipe and wouldn’t have to ask.” This sort of pedagogic awareness permeates his teaching and approach.
Today you’ll probably find Marrom in his academy in Leme, at the foot of the aptly named ‘Favela of Babylon’ in Rio’s South Zone. He’ll be surrounded by a capoeira treasure trove of photos of old Capoeira Mestres, pictures of Africa, Drums, Berimbaus and other bits and pieces, his charisma permeates the entire space. He’ll probably be telling someone off for doing a movement with the wrong feeling or laughing at some observational joke or other. Every day he passes on the philosophy and movement of Capoeira Angola to his students. His school is called ‘Marrom Capoeira and Students’ recognising the importance of everyone, as Capoeira is a group activity.

was born in Salinas das Margaridas, Bahia where he was bought up by his mother who harvested cockles from the manguezal.  As a young adolescent he was orphaned and he moved to Salvador to live with his aunt.  To this day he looks back on the day he found Capoeira at the Academy of Mestre Bimba where Mestre Bamba was teaching as the day that changed his life.  As he likes to recount, Capoeira was his university.  Inspired by Capoeira and Mestre Bamba, Marinheiro trained hard eventually working himself off the casual labour market into the employment of Salvador city council as a life guard.  Once graduated as a Capoeira teacher, Marinheiro dedicated himself to teaching the disadvantaged children in his local area and he soon built up a vibrant and dynamic Capoeira group (Grupo de Capoeira Ginga e Malicia) who excel in Capoeira and other cultural manifestations such as ‘Bumba meu Boi’ and ‘maculele’.

Today Mestre Marinheiro runs the community centre in Baixa da Egua funded by Project gem and his organisation has been recognised by the federal government as the best Capoeira group in the state of Bahia owing to its strong community links and social projects.  The centre that he runs is a designated ‘Ponto de Cultura’ and recognised as such under Federal law.

Mestre Marinheiro is known and respected in the Capoeira community as one of the few masters who still teach the unadulterated regional style Capoeira as originally conceived by Mestre Bimba.  He is an accomplished musician and enjoys playing and singing Capoeira with anyone and everyone, equally comfortable playing with angoleiros and regional alike.

For us he is an invaluable insight into the afro-brazilian life and culture of Salvador.  His knowledge of the traditions and folklore help us to understand better the rituals and songs of Capoeira.  His sunny disposition, combined with a mental toughness forged in adversity, proves an inspiration to all.  Ultimately, Capoeira has set Marinheiro free, allowing him to transcend the socio-economic boundaries of his birth and realise his personal potential.

Capoeira Groups we are associated with

Sunday Morning 11am Confirm this before – 12:30 either Hackney Marshes, Haggerston Park, Shoreditch park depending on weather
INFO 07779031273