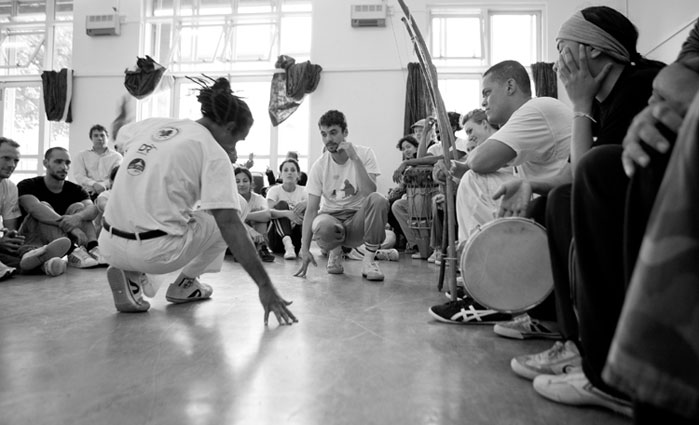 Capoeira has always been rich and beautiful. We find everything in capoeira: life philosophy, self-defense, art and culture. We find part of religion in capoeira if we seek it. The word religion means ‘to re-link oneself,’ so everything to which we link ourselves would be a religion. We shouldn’t learn capoeira in order to cause trouble with it, but instead use it in the hour of defense when necessary. After all, in its life philosophy capoeira is love, celebration, and also joy.

Capoeira is a game between two people. It’s like a game fight to music with skill, strategy, dance, and acrobatics. Playing capoeira involves a spontaneous and spectacular exchange of non-contact attacking and defensive movements, where the two players try to create an opportunity to trick, trip or kick their partner. There is no official winner but players and spectators will each decide who played the best game!

Capoeira combines dance, martial arts, music, drama, acrobatics, socialising and much more. Capoeira is an Afro-Brazilian artform that was born out of the struggle for freedom of the slaves in Brazil. It’s origins are old although now it has evolved and spread across the world in a variety of styles (see Cultural London and capoeira).

What do classes involve?

Capoeira classes consist of the following:

It’s difficult to find any culture not represented in London’s busy streets or quiet suburbs.  A wide diversity of age, race, colour and culture is here and has claimed a little piece of London as its own.  This now includes Capoeira.
Capoeira has been here continually since the late 80’s and has many different styles, groups and flavours.  A unique scene has developed that can see masters, teachers, students, friends and family joining together from different groups to play this Brazilian fight game. Great contribution has been made by the street rodas of Brick Lane, Camden Lock, Liverpool Street and Southbank.
Capoeira is here. It’s being played in the streets, it’s being used in contemporary dance, it influences film, street dance and other fighting systems, and it is practised by many to help balance their normal life.
London’s diversity can now be seen within its own capoeira scene.

Sunday Morning 11am Confirm this before – 12:30 either Hackney Marshes, Haggerston Park, Shoreditch park depending on weather if new please call to check
INFO 07779031273